Sanjeev Singh, Videovision Entertainment’s Director of Acquisition and Distribution, announced the acquisition of the A UNITED KINGDOM, directed by Amma Asante at the Toronto International Film Festival.

A UNITED KINGDOM is the greatest love story never told.  In 1947, Seretse Khama, the 26-year-old King of Botswana, fell in love with Ruth Williams, a 24-year-old London office worker.  Their marriage was opposed not only by their respective families but also by the British and South African governments.  But Seretse and Ruth defied family, apartheid and the British Empire – their love triumphed over every obstacle flung in their way and in so doing they transformed their Nation and inspired the world.

Seretse Khama’s impact on post-independence Botswana was acknowledged by Nelson Mandela when he said, “The legacy of Sir Seretse Khama lives on in his country, which continues to be a shining beacon of light and inspiration.”

A UNITED KINGDOM generated rave reviews with The Hollywood Reporter saying the film was ‘remarkable…a rousing love story and a triumphant call to justice’; The Guardian called the film a ‘stirring Empire drama…told with terrific warmth and idealism’; The Wrap declared the film to be ‘stirring…dramatically different’ and The Times of London said the film was ‘powerful…a core of steel’.

Videovision Entertainment’s CEO, Anant Singh who attended the world premiere in Toronto commented, “The film received a spirited response with an extended standing ovation applauding David Oyelowo’s powerful performance and director, Amma Asante’s meticulous direction. It certainly is a coup for us to have acquired A UNITED KINGDOM and conclude a deal before the world premiere in Toronto. Seretse Khama and Ruth Williams’ story is one of the most compelling love stories from the African continent, and tells a fascinating story of two people from different worlds who fall in love and eventually marry despite fierce opposition from all quarters. It is also a story of triumph which deals issues that promote social cohesion, and will find resonance with South African audiences.  Following on MANDELA: LONG WALK TO FREEDOM, we are pleased to be associated with A UNITED KINGDOM which tells a story of another son of Africa who steered his country to independence, and we are delighted to release the film in the year that Botswana celebrates its 50th anniversary of independence from Great Britain.”

The film will be released in South Africa, and in East and West Africa by Videovision Entertainment through United International Pictures. 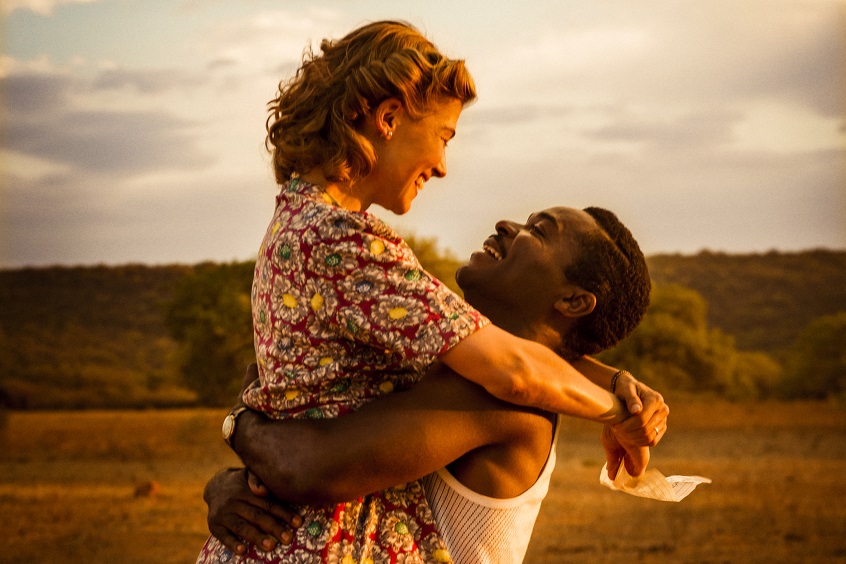 Rosamund Pike as Ruth Williams and David Oyelowo as King Seretse Khama in A UNITED KINGDOM.